How the Eye Works 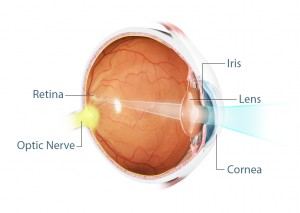 The eye has a dual focusing system consisting of the cornea and lens (whereas the camera has only one lens). The cornea is the clear window at the front of the eye which transmits and focuses an image via the pupil through the lens to the retina. The pupil is a hole in the central iris ( the iris gives us our ‘eye colour’) . The pupil has muscles which can alter its size and thus alter the amount of light entering the eye.

The lens is made up of a flexible tissue called the ‘lens capsule or ‘capsular bag’ which encloses/surrounds the internal lens material. The lens material is initially clear (it is made up of water and protein arranged in a precise pattern ) and the lens is soft in consistency in children and gradually hardens and yellows with age. The entire lens is suspended in the eye by small fibres called zonules which attach the capsule to the inner layers of the eye.

Muscles acting on the capsule via the zonules can change the shape of the lens allowing a wide range of focusing ( near to far) in our younger years. With age the lens flexibility decreases in part due to hardening of the lens material. This results in decreased ability to see close up, starting usually in the 40’s (this is called presbyopia ) and requiring reading glasses.